Two weeks ago was Affiliate Summit West 2014 in Las Vegas. I’m a bit behind in getting my recap written due to coming home with some conference crud and dealing with the extreme changes in temperature. Las Vegas to Polar Vortex anyone? I’m from Detroit though and I am allowed to complain though.

I arrived on Saturday, pretty early, so I was able to sneak in a few hours of sightseeing. My first stop was heading over to the Bellagio to see how their Conservatory and Botanical Gardens were decorated. Right now it is celebrating the Chinese New Year. It was so nice to step into all the color, flowers and greenery. 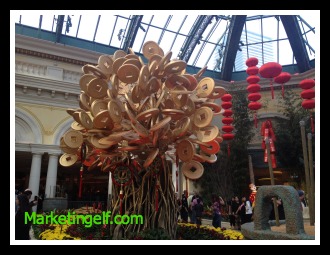 While walking around I also went through part of their convention center. There was some kind of “own your own business” type company having a leadership conference. I remember years ago researching this company for a friend and not liking what I saw. It certainly had a different vibe than any Affiliate Summit I’ve ever been to. Lots more suits for one thing.

Saturday wrapped up with picking up my badge at early check in, attending a reception for speakers, and then grabbing a late dinner. 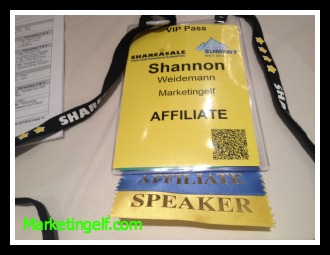 Affiliate Summit West was held at the Paris Hotel and Casino for the first time. I have walked through there before and of course the epic Shareasale party has been held at the Chateau nightclub for many years now. It was nice because it was just a short walk to the Convention Center from the hotel elevators. Plus the convention center was all on one floor. It did however cause a lot of people gathering and congestion in certain areas. It will be interesting to see if it is held there again.

I went to many great sessions, including the keynote by Steve Denton, Vice President of Marketing Solutions at eBay Enterprise. It was filled with some really interesting statistics and figures about the affiliate marketing industry, including who is driving traffic and closing sales. You can watch it here:

This was also my second time speaking at Affiliate Summit and I think we presented a great panel on working from home with Karen Garcia, Deb Carney, and Scott Jangro. I’m looking forward to the opportunity to speak at a future Affiliate Summit.

Speaking of which, the next one is already open for registration and it is Affiliate Summit East 2014 and it is going back to New York City August 10-12, 2014. Right now is the absolute best time to register because you can save hundreds of dollars with the early bird prices. I highly recommend the VIP pass as it gets you into all the sessions, the Exhibit Hall, Meet Market, and meals. You don’t want to miss the meals, they are definitely where some great networking (and fun) can happen.

It was definitely another great show put on by Affiliate Summit. I came home with new knowledge, new connections, strengthened old ones, and am moving my business forward in new directions. I’m already looking forward to New York!